On July 19, 1990, Navy Captain Gunther Russbacher and his wife Rayelan checked into VIP Quarters on Offutt Air Force Base in Omaha, Nebraska.

What is unusual about this is Captain Russbacher had just been released from the St. Charles County Jail two days before!

Captain Russbacher is in the Navy and part of the Pacific Command. He is assigned to Oak Harbor, Washington. (No explanation for the misspelling)

TDY stands for temporary duty. NRD stands for Naval Reserve District. According to Russbacher, many covert missions were funded out of NRD at Offutt AFB.

At the time Gunther and Rayelan were on Offutt air Force Base, a top secret meeting was going on. Many members of Congress were present. Also present were Secretary of Defense, Dick Cheney; National Security Advisor Brent Scowcroft; the Director of the Central Intelligence Agency, William Webster; and President George H.W. Bush and his wife Barbara.

The publicized purpose for the presense of these men on Offutt Air Force Base was the closing of the Looking Glass Command, the B-52s that flew 24 hour a day as a flying nuclear command center.

The actual reason for the meeting was to discuss and plan a top secret flight to Moscow which had to be completed before President Bush could invade Iraq..

An agreement, already signed by President Bush was taken to Moscow to be signed by Mikail Gorbachev. The agreement was a quid pro quo between Bush and Gorbachev. If Gorbachev did not side with Iraq in the coming war, Bush would see that he got something... what that something was, is not known.

Russbacher and his wife stayed on Offutt four nights. They left on the 23rd and drove to Reno, Nevada.

On July 26th, 1990, the flight to Moscow took place with Captain Russbacher piloting one of the SR71s. With them went the signed treaty for Gorbachev to sign.

Immediately after his return from Moscow, Russbacher was ordered to Castle Air Force Base in Merced, California for a promotion to Admiral and a press conference. Instead, he was met by FBI agents who arrested him for impersonating a Naval officer.

That charge was eventually dropped, but not until Russbacher had spent two years in prison for misuse of a government jet, the one he had used on August 30, 1989, to fly to Reno to marry Rayelan.

At the end of the prison term for misuse of goverment property, Russbacher was transferred back to St Charles County, the very jail he had been released from just days before the meeting on Offutt.

He was charged with probation violation.The violation was impersonating a Naval Officer. When he was arrested on Castle Air Force Base he was wearing his Navy uniform and awaiting the other Admirals who were arranging a press conference and a promotion ceremony.

The date of February 5, 1992 at the top of the Offutt Document is the date the document was printed and taken to court in St Charles County by the Manager of the Offutt Inns. The manager testified that no one could gain access to a top secret base unless they had been cleared!

In spite of this document and others, the government still denies that Gunther Russbacher was ever in the Navy! 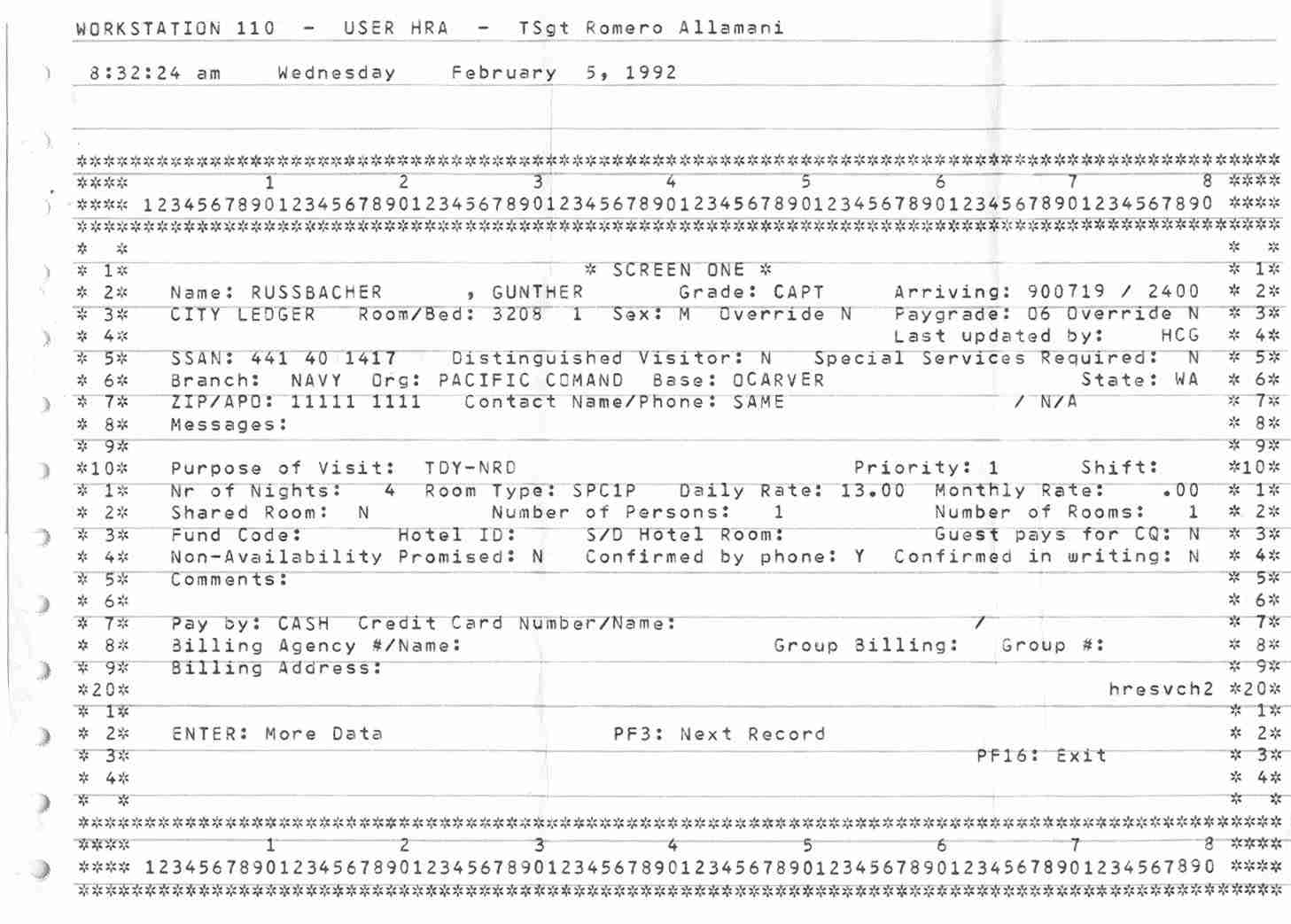